Remyelination is a very important part of the process of recovery from an MS exacerbation. When I was a resident, the dogma was the remyelination did not occur and demyelinated fibers did not conduct; however, Charcot had reported unequivocal evidence that they could conduct, the neurologists at that time apparently didn’t know their history. I spent much of my career working on the process of myelin regeneration and repair. Remyelination is often quite effective early in the disease but becomes less complete as the disease progresses but even then, what little occurs is very important. Most of the long term disability in MS is due to the loss of axons (nerve fibers) that occurs during demyelination. Dr. Bruce Trapp and co-workers at the Cleveland Clinic studies nerve fiber loss and found that, in a typical acute plaque, about 11,000 nerve fibers were interrupted per MM3 of acute plaque.

Demyelinated nerve fibers can conduct nerve impulses but conduction is markedly slowed. When pulses are very close together in time, the second pulse often fails. Conduction is temperature sensitive so that when the body temperature rises, symptoms not normally present may recur due to failure of conduction. This can occur when working out in the heat, after a hot bath (A person with MS should never ever get in a hot tub alone, people have actually died because the heat made them too weak to get out of a hot tub by themselves). I have had patients who took a hot bath and had to run cold water to cool off before they had the strength to get out of the tub. A good example of the effect of temperature is Uhthoff’s phenomenon where a person who has had optic neuritis loses vision when exercising or is out in the heat. It is not an MS attack and will clear when the person cools off. The explanation of why this happens is fairly technical and requires an understanding of normal nerve conduction.

Figure 1 A and B illustrate normal nerve conduction. The electrical charge inside of the nerve fiber is normally negative at about minus 70 millivolts (mv) and this charge differential is maintained by the sodium potassium pump such that there is a higher concentration of sodium outside the fiber and a higher concentration of potassium inside the fiber. There is a small leakage of the potassium out of the membrane which maintains this charge differential. Basically the difference in potassium concentration between the inside and outside of the axon is serves as a battery that stores the energy for nerve conduction. As the nerve impulse comes in from the left in A, it is a positive current that depolarizes the node of Ranvier. When the negative charge drops to about -30 mv., the sodium channels open allowing influx of the positively charged sodium ions and sending the current down to the next node where the process is repeated. This is a very fast moving process and myelinated nerve fibers can conduct at rates of up to 60 meters/second (about 180 ft./sec.). Demyelinated fibers generally conduct at 1-2 meters per second. At that conduction rate it would take 1-2 seconds for a message to get from your toe to your cortex. If remyelination is complete, the conduction rate and the efficiency of conduction approach normal and the following discussion of remyelination at the plaque margins does not apply.

In figure 1C, the positive charge impulse reaches a demyelinated segment and is dispersed along the demyelinated portion of the nerve. Here we will need to go back to your high school physics and the function of capacitors. A capacitor is a device with two plates separated by an insulating dielectric substance. A charge on one side of the capacitor (fig. 2) induces a charge on the other side. The amount of charge induced is inversely proportional to the distance between the two plates. If you think of the nerve fiber as a circular capacitor and the axon membrane as the dielectric, you can see that, in the absence of myelin, the electric charge on the membrane will be much, much greater than with the myelinated fiber. (See Fig. 2). 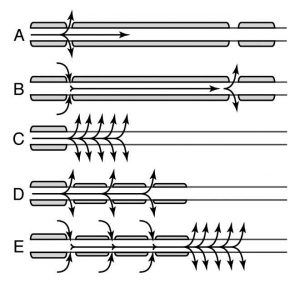 What are the consequences of this remyelination at the plaque margin? First, the demyelinated segment can now initiat impulses but transmission failure will often occur in rapid trains of impulses, the messages are late getting where they are going, are somewhat degraded and conduction is heat sensitive.

To illustrate how significant this can be, people with MS have died from hyperthermia because they became too weak to get out of a hot tub and there was no one present to help them. I once was called to see a patient in her own office who had MS and was developing the flu. She had come to work that morning and then developed a fever of about 103° and with it became so weak and ataxic she couldn’t stand. We gave her 2 Aspirin and sent her to the emergency room for admission. About an hour and a half later I got a call from the resident asking why I wanted to admit this patient who didn’t appear to be having any problem; however, her fever recurred before she reached the ward and the ward resident had no difficulty understanding the need for admission.

Another consequence of this arrangement is that much more energy is required at the junction between myelinated and demyelinated segments is that much more sodium enters the nerve at each impulse and the pump that pumps the sodium out and potassium into the nerve fiber can’t keep up and conduction fails. This is often referred to as “nerve fiber fatigue”. When the difference between the sodium and potassium concentration inside the fiber approaches that outside the fiber the fiber will no longer conduct impulses. Clinically what we see is that as the disease progresses, patients who have trouble walking can walk shorter and shorter distances before their legs cease to work. A similar conduction failure can be seen when the myelin on the motor nerve roots is damaged by compression which also limits walking. This condition is known as “pseudo-claudication”. This is by analogy with walking limited by impaired circulation to the muscles where walking is limited by loss of energy due to oxygen deprivation which is painful and known as “intermittent claudication”.

Conduction can be measured in a number of different pathways in the human nervous system. We measure if with evoked potential testing. You may have had a visual evoked potential test to measure conduction in the optic nerves. This is usually done by the use of a checkerboard image on a computer screen that keeps reversing. The effect of the changing impulses are averaged using electrodes over the occipital lobes and by doing this we can determine the average conduction velocity in the visual system. It is almost always slowed in anyone who has had optic neuritis. Similarly we can measure conduction through the spinal cord. By using a magnetic impulse device over the motor cortex and measuring the time to the induced muscle movement, we can measure evoked potentials in the motor system.

In work done with Carol Pratt Ph.D. and Fay Horak Ph.D. we measured motor evoked potentials and sensory evoked potentials in MS patients with imbalance. Somewhat unexpectedly found that the imbalance is due to delays in sensory conduction. The brain treats the delayed sensory signals as valid signals and cannot adjust to the delay. Delays in the motor pathway did not cause imbalance because the brain knew what was happening and could correct for the poor and delayed motor response. The delayed position sense is the reason that a cane helps, it provides the brain with a better indicator of body sway over a much shorter pathway. It is also part of the reason why many patients will tell you that their balance is much better inside than outside (many say that they “have trouble on rough ground”). These patients become visually dependent for balance and objects close to them provide good targets where depth perception is effective. It is usually not very effective with objects more than 8-12 feet away. Incidentally, this is almost certainly the reason that dorsal column stimulators, which basically block position sense, were popular in the 1970’s. They fell out of favor and payers refused to pay for them because few people believed the results. Most believed it was a placebo effect. Our brains can deal with an absence of information much more easily than they can with false or distorted information and delayed information in the position sense system is false information because of the delay.

Often where there are demyelinated fibers, they are in close contact with one another. When this happens, the electrical activity can spread from one fiber to many other fibers resulting in the simultaneous firing of an entire fiber bundle. This is what happens in trigeminal neuralgia (tic doloreux) and in tonic spasms. It can usually be controlled with carbamazepine (Tegretol®) or some other anti-seizure medication. In addition, ephaptic conduction can cause epileptic seizures and persons with MS are at increased risk for epilepsy.

There are several ways of dealing with heat sensitivity. Cooling vests can be worn when going outside on hot days. These are vests with multiple pockets for freezer packs which will keep you cool, usually for an hour or more in the heat. Another way that one of my patients used is a cold swim. This works because the limbs are cooled and, the body reacts by vasoconstriction to maintain the core temperature. These limbs serve as heat sinks they delay the increase in body temperature in a warm environment. My patient said that the effect lasted for 3-4 hours after about 15 or 20 minutes in the cold water.